A gym mat is a very versatile sensory tool. It can be use for practicing yoga or s'cool moves, made into an awesome tunnel, or used to block off an area that is too distracting or a child who is too distractable. I have only started using music frequently in my classroom over the past couple years. Last year I used it for a student who would continually chatter during group work. We felt he was doing this because he was trying to cancel out some of the other classroom noises and it was like he was creating his own "white noise". Although this chattering may have been calming to him it was awful for the rest of us to endure! Playing  steady, calming music through headphones on low enough volume that it gave input but he could still hear me teach did the trick. I also use this calming music for kids whose engines are too revved up or for a calming break between activities.

A lot of my students are sensitive to the awful fluorescent lights that every school seems to have. In my little classroom I am able to switch off one of the light switches and my room is still lit fine throughout. However, in some of the bigger rooms switching off lights means a whole section of the room is dark. These blue light covers are perfect for this. Another option if you can get maintenance to do it is taking out some of the bulbs from each of your lights. I have one student who is still sensitive and he is allowed to wear a baseball cap all day. School can be a noisy place! Especially during assemblies or for my students with autism who are super sensitive to noise. Over the years I have had students who were "screamers" and I wish I would have had a set of noise-cancelling headphones for the whole class (including me!).

It is common for kids with sensory issues to need a safe place to "escape" from the stressful school environment. Scheduling time for a student to have a tent break is a great way to provide a place for this escape. The tent can block out all of the visual stimulation of the classroom. I have had several students who were not quite ready for the classroom due to their sensory defensiveness. Typically these kiddos were kindergarteners with autism who had had limited experiences outside of their own homes. For these students, I allowed them use a tent within my classroom. At first, they would spend a lot of the day within the tent coping with the new environment. The tent was a safe place for them in the stressful new environment. Gradually we worked on getting them more accustomed to us (either by sharing the tent with them for play activities) or by setting up opportunities that were fun and not threatening outside of the tent. This eventually led to less and less time in the tent and eventually full inclusion within our classroom.

Thanks for sharing these resources.

Hi! I'm Allison. I am a SpEd Teacher who is passionate about creating resources to help every special education teacher succeed! 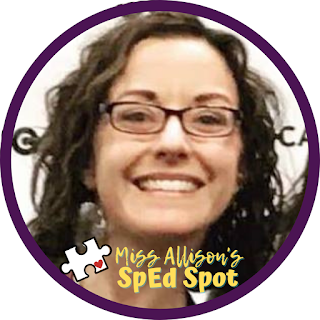 Find me on TpT!

Find Me on Social Media!